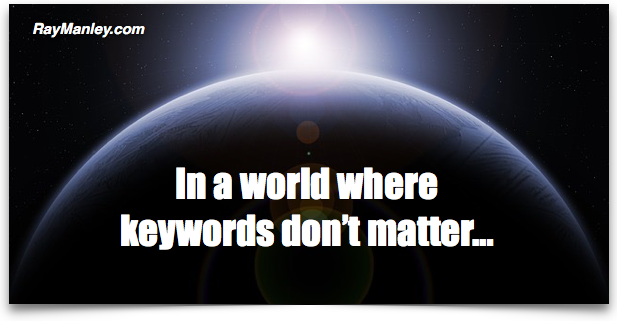 The first paragraph or sentence of a blog: If it doesn’t stress you out, you don’t understand what’s at stake.

Here’s why it should be a major source of stress: A killer first sentence needs to accomplish two goals that are usually diametrically opposed to each other:

The problem is that many of the keywords we need to use in our writing aren’t all that sexy on their own. If you’re like me, you’ll sit at your keyboard and start churning out the words to engage readers at the top with a story or something else that will catch their attention and draw them into your article.

Eventually, you’ll review your Yoast scores and your mellow will get all harshed because Yoast – in that clinically sterile way it has – will point out that you didn’t use your keyword in the first paragraph.

Related to this is the fact that “storytelling” has become the most highly recommended way of communicating with your audience today. The classic ways we like to weave important keywords into our writing for SEO purposes doesn’t translate very well to natural storytelling. And, I can add one more wrinkle: Often we’re tasked with writing persuasive copy.

So, how can you keep Yoast happy (and therefore publish articles that are SEO effective and probably persuasive and/or compelling too), impress Google’s ranking algorithm, and create an opening paragraph or two that will engage readers? That’s the question I’ll be exploring.

What is engaging copy?

Before we look at that question, I want to quickly touch bases on what it means to “engage” the reader. It’s a phrase we hear all the time and I had come to take it for granted. I think Joseph Sugarman, in what has been republished as “The Adweek Copywriting Handbook: The Ultimate Guide to Writing Powerful Advertising and Marketing Copy from One of America’s Top Copywriters,” has explained or defined “engaging copy” the best.

That is the most straightforward way to explain engaging copy that I’ve found so far. And, if you have some dull, technical keyword you’re trying to build an article around, you can see how it would be difficult to adhere to Sugarman’s supreme goal of getting people to read the next sentence.

The first step in solving a problem is understanding it and at this point, I hope I’ve adequately described the tension between copy that engages readers and copy that makes Google happy. (By the way, as far as I know, Google hasn’t yet developed an algorithm that detects killer copy, aside from measuring the popularity of the copy.)

Here are some approaches to try when you’re working hard to create powerful SEO copy and powerfully engaging copy.

The ‘But first!’ technique

We’ve all seen TV ads or heard ads on the radio where the announcer introduces the product and then says something like, “But first…!”

I like this technique in blog writing and I think one of the reasons it’s effective is because people like to go on roller coaster rides. Let me give you an example. On another site I operate, I wrote an article where my keyword was “solopreneur lifestyle.” I didn’t want it to read like a middle school essay, yet Yoast was breathing down my neck to get my keyword in the first paragraph. Here’s what I wrote:

Ahem. Since the topic is the solopreneur lifestyle, why am I not writing this from a beach in Thailand?

I’ll answer that when I start to wrap up this screed, but let’s touch a few other bases before I start to get up close and personal with all you strangers.

The essence of the “But first!” technique is to declare your topic and then swerve off the road in an engaging way for a bit to set up your topic by providing it with an unusual context.

Notice three other strategies in the three paragraphs above:

Few things get our attention faster than running into a jerk. That aspect of human nature is at the heart of what makes the contrarian approach work.

Here’s what you do:

There’s also a lot of the roller coaster effect in this technique. Readers are expecting to hear the same things rehashed, but you go over the top and plummet down the opposite side of the issue. And, like a roller coaster, you can change directions again and head back toward conventional wisdom – you just need to be sure your context supports the points you want to make.

So you think low mortgage rates are good?

Try telling that to the thousands of homeowners who were sold on low mortgage rates and then ended up losing their pants, er I mean homes, in the housing market collapse!

Some low mortgage rates are good, others are assassins disguised as your friend.

Do you know the difference?

If the contrarian approach is to start out painting a picture that is worse than everyone believes, the over-the-top technique is the opposite. It paints a picture that hypes every good feature associated to your keyword to the Nth degree.

The solopreneur lifestyle saved my life.

No. I’m not exaggerating: It literally saved my life.

You see, last December I was diagnosed with a rare autoimmune disease and the treatment is to drastically suppress my immune system. If I were still teaching school and exposed to every virus inhabiting those snotty-nosed kids, it could kill me.

Lake Bell stars in a film built around that famous movie trailer line (imagine a low male voice): “In a world…” Excuse the rabbit trail, but if you haven’t seen the movie, you need to check it out.

Those three words allow you to construct any reality you desire. You can use those three words, if you like, but it’s the idea of an alternate universe that I want you to get a hold on. I’ll use them in my example:

In a world where low mortgage rates rule supreme and bankers are shaken to their very core, men and women like you are finally able to take control of their financial lives.

If this world sounds too good to be true, it’s time you were exposed to the fact that…

Similar to the In-a-world technique is the “Imagine” tactic. You invite your reader to imagine a certain reality or situation and then use that as your springboard. Both of these require strong language that stirs the reader’s emotions. You want your imagery to come alive in the reader’s head.

This is far from a comprehensive list of ways you can get your keywords plugged into your lead without resorting to antiseptic prose. In fact, it would be very easy to follow any of these approaches with storytelling.

For more advice on the subject, check out “Opening Sentences that Close the Sale,” by Karon Thackston. She takes a different track. She doesn’t focus on keyword incorporation at the beginning, but instead analyzes a range of leads keeping an eye on the success Reader’s Digest has had over the years with engaging readers.

The latest Freelance Writing and Editing! https://t.co/bwWqPAoafH Thanks to @lets_ceo #freelance #freelancing

The latest Freelance Writing and Editing! https://t.co/ZtdmLPkSfU Thanks to @EverydayLake #freelance #freelancing

The latest Freelance Writing and Editing! https://t.co/izwBRzD3hN Thanks to @EverydayLake #freelance #freelancing

The latest Freelance Writing and Editing! https://t.co/Q7nSjqeRgM Thanks to @CanWork_ @iworksolo1 #freelance #freelancing