When my habit-creating app dumped me 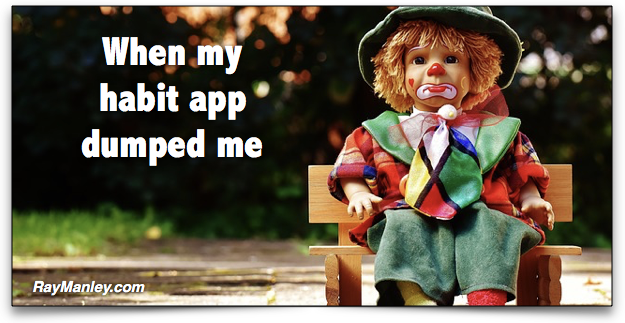 Following our own advice is one of the most difficult things to do. The bare-naked truth of this is exposed when we try to either break bad habits or create new good habits.

Parents are always telling their kids not to do things that the adults do every day. On December 31 of every year millions of us vow to hit the gym at least three times a week, but by January 20 it’s like The Amazing Kreskin has entirely erased that commitment from our brains.

For many years, I believed something I heard once: It takes 21 days to create a new habit. After testing that premise umpteen times, I finally decided that either it was only true for bad habits, or my constitution was tragically deficient…or both.

That’s why I was excited to discover the habit app genre while working on an article about productivity apps. There are more than a dozen iOS and Android apps designed to help you create new habits.

Heck, an app would work with me for longer than 21 days, right? This had to be the ticket.

After a little research and price comparison – let’s face it, you know I was only going to go with a free app – I downloaded Strides on my iPhone and along with it came its Apple Watch app. By the way, after more than a year of abject skepticism, I forked over the dough for an Apple Watch in January (Hey, there’s a New Year’s commitment I kept!) and I absolutely love it.

Between the iPhone and Apple Watch apps, I was supremely confident that Strides would have my personal life shipshape in no time at all. And frankly, there was only one new habit I wanted to create off the bat: writing a short journal entry once a day.

I have found that writing a short journal entry is the foundation of being able to take one’s own advice, which, as I mentioned at the top, is one of the hardest things to accomplish.

Journaling gives you a tool to remind yourself what you want to do and need to do. As a freelancer and solopreneur, it’s very easy to get absorbed by the task at hand and never see the bigger picture and never make the personal management decisions required to grow your business.

Journaling on a daily basis gives you the ability to set out what you need to accomplish in the near term – a to-do list, if you like – as well as record and evolve thoughts for longer-term business development.

So it was with great anticipation that I downloaded Strides to my devices. It was easy to set up. I was starting out with only one task that I wanted to do daily Monday through Friday. I set it up to remind me every morning at 8 a.m., which may have been a mistake on my part. It turned out that I was almost always doing something else at 8 a.m. that couldn’t be interrupted.

For a few weeks, my wrist would buzz at 8 a.m. and I came fairly close to logging my 5-days-per-week goal. Then something happened and I’m not exactly sure of the timing. Either I ignored the reminders several days in a row and Strides just stopped reminding me, or Strides on its own decided to stop reminding me.

My app just gave up on me. My wrist stopped buzzing. Reminders ceased appearing on my iPhone screen.

It was like being dumped by a girlfriend who finally decides that she can’t change you, so it’s time to move on.

Honestly, I don’t know what happened. Did I do something wrong? Is there a bug in the app or is that the way it’s programmed?

Whatever the truth might be, in a vain attempt to break up with the app before it could get in the final nasty word on our failed relationship, I kicked it off my phone and hooked up with a new habit-creating app, Productive.

We’re still in the glowing, early days of our relationship. Can she change me? I hope so. For crying out loud – I only want to get a little better at journaling. Is that too much to ask for from a free mobile app?

Or if I want to make even a small change like this, do I have to pay for it?

I wrote that last thought in a jokey manner, but the more I think about it, the more I believe that it could be true. If I invested money in an app, I would treat its prompts more seriously. After all, I didn’t really have anything invested in my relationship with Strides and now Productive.

I’ll let you know how this goes…

[Update: Productive also kicked me to the curb.]

Not realizing your potential? This 'one-two punch' will boost your productivity to new heights – Ray Manley

[…] It’s not for want of trying. Over the years I’ve used Day Timers, to-do lists, reminders scrawled on the palm of my hand, white boards, sticky notes, and more recently, habit creation apps…with which my failure is chronicled here. […]

The latest Freelance Writing and Editing! https://t.co/bwWqPAoafH Thanks to @lets_ceo #freelance #freelancing

The latest Freelance Writing and Editing! https://t.co/ZtdmLPkSfU Thanks to @EverydayLake #freelance #freelancing

The latest Freelance Writing and Editing! https://t.co/izwBRzD3hN Thanks to @EverydayLake #freelance #freelancing

The latest Freelance Writing and Editing! https://t.co/Q7nSjqeRgM Thanks to @CanWork_ @iworksolo1 #freelance #freelancing