The Headline Writing Trick You Can’t Afford to Ignore! 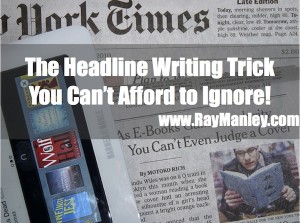 If you’re reading this, my headline worked. If not, then why am I typing this?

The simple point is that today the main job of a headline is to get you reading at least the first sentence of what follows.

Any headline that does that is successful.

The downside to this is that we see so many headlines on the web today that we have been desensitized to many of them. The upside is that we’re so freaking predictable it’s easy to rope most of us in with a few gimmicks, er, “strategies.”

I use Evernote to keep an ongoing collection of Internet headline word and phrase trends. That’s how I crafted the headline for this article. “Trick” is really big and the phrase “You Can’t Afford to Ignore” is very popular.

Do you hate Ann Coulter?

While I know many of you probably loathe Ann Coulter, she made the best use of one of these hyper-popular headline phrases last week when she gave this headline to an article she wrote:

Raise the Minimum Wage to $14 an Hour Using This One Weird Trick!

The reason we keep seeing phrases like “You won’t believe,” “You’ll never look at…the same again,” “…will blow your mind” and “…reaction is priceless” is because they work. When they stop working, headline writers will move on.

Pull on the heartstrings

However, it’s probably more important to understand why those headlines work rather than how to steal them for your own purposes. They work because they arouse our curiosity. To do this they appeal to various human needs and emotions, such as:

For the most part, writing on the Internet doesn’t work when paired with a headline like:

You Won’t Believe What Happened When I Ran This Simple Ad!

Comedy is often built around juxtaposition. Dennis Rodman on a diplomatic mission to North Korea. O.J. Simpson’s quest to find the real killer. These kinds of contrasts are often used or implied in viral headlines.

And that, my friends, is the trick you can’t afford to ignore.

http://www.flickr.com/photos/karenhorton/4480230122/ “In E-Book Era, You Can’t Even Judge a Cover,” © 2010 Karen Horton, used under a Creative Commons Attribution-ShareAlike license: http://creativecommons.org/licenses/by-sa/2.0/

[…] Space didn’t allow me to say everything I had on my mind about headlines when I touched on the topic recently. I’m still happy with what I wrote and it is especially […]

Make money from your hobby the easiest way https://t.co/qwovYIY7GN