Make Headlines Dance at Your Command 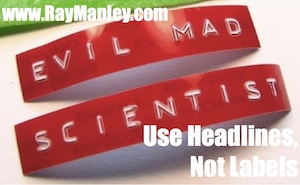 Ugh. Space didn’t allow me to say everything I had on my mind about headlines when I touched on the topic recently. I’m still happy with what I wrote and it is especially applicable to most blogs and content marketing articles.

However, I’m going to take a small step to the side and look at good headline writing from a slightly different angle; I want to contrast headlines with tag lines or labels.

Both headlines and tag lines have their places in a good website and in good writing, but I see far too many writers who label their articles rather than give them a legitimate headlines.

By the way, I come from a newspaper background. I was a reporter, editor and publisher. Newspaper reporters don’t write the headlines for their articles; that is the job of a copy editor. However, with almost every article I write for the Internet today—including all the ghost writing I do—I write the headline. It’s a rare occasion when an editor rewrites or tweaks the headline I have put across the top of my article.

Can you tell which is a label and which qualifies as a bona fide headline? I don’t think it’s a difficult question. The first is obviously a plain label. It could be something you put on a “to-do” list and check it off when you accomplish it. Note that it doesn’t use a verb in any form. There is no “action” within it.

The second one is full of action. Facebook is spending billions! Find out why! The “why” at the beginning of this headline, tells us that analysis follows. If the article had been written from a less analytical point of view, the headline could have read, “Facebook Spending Billions on Companies it Doesn’t Need.” Note that in this case, I omitted the word “is.” Often the verb “to be” is only implied in headlines.

Verbs: Where the action is

The presence of a verb and some kind of action is what usually separates labels from headlines. Verbs engage us in ways that are impossible for the other categories of words. Perhaps the project management label that was trying to be a headline would have been better like this:

Labels have their place. I really like them as tag lines for websites. I get a kick out of developing them. I recently wrote a long list of tag lines for a company that teaches Spanish in South America. The unique selling points of this company are its extraordinary emphasis on speaking skills and small classes. I suggested tag lines such as:

Almost none of these would suffice as a headline above an article about this chain of language schools. But combined with a headline or under a logo, they would perform nicely.

Finally, you’re doing your reader a disservice with a label headline. Something like three out of four people only read the headline. With good headline writing you are still imparting information—even when they don’t read the article itself. 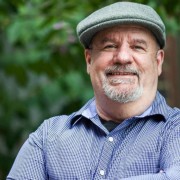